How to Build a
Beautiful Large Cross 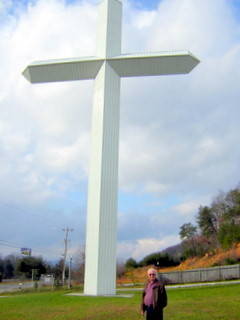 "There is no Patent on God's Work. I will show you
how to build a cross like this"

It was the year of 1989 when I got saved and received the Lord Jesus Christ as my Saviour. I was 50 years old at that time. What was so pathetic about it is that I claimed to be a Christian at the time, and had even joined a church. Simply because others were going up to the alter to receive their Saviour, I went too. But I had no conviction in my heart that led me to the Lord, I just went because everyone else was going.

It was then that I realized what the cross stood for, and that what the Son of the Living God did for me on the cross was to make a way for me to escape a place called Hell! That God so loved the world that He gave His only begotten Son, and that I could be redeemed by the blood of my Lord and Saviour Jesus Christ on the cross.

For the first time it was real to me, He got my attention. I received the Lord as my Saviour and have never been the same since.

I am now an ordained minister and often preach a message on what a loving God did for me. The title of this message is "How can You Keep from Loving Someone like Him?" The more I read and study the bible, and rightfully divide the word of God of Truth, the more faith I have in Him.

"I am 70 years old.  My future plans, the Lord willing, is to encourage people all over the world to build these crosses. I would like to see them built on every continent and will assist with blueprints, suppliers, and consultation.

In addition to the United States I would like to build a big cross on one of the hills or mountains in Ireland for the Protestants and Catholics, and perhaps, in China, Africa, South America; anywhere that will help the world to see one another through the cross." 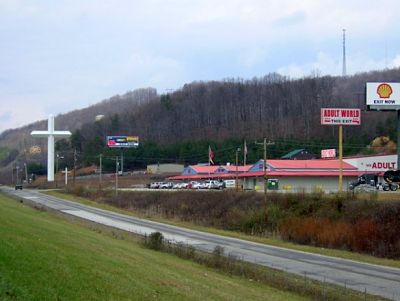 Mr Potter is not only a well known contractor, but also a minister who is full of love and compassion for his fellow man. He is quick to say, "These crosses are not about me, they are about my Lord and Saviour Jesus Christ."

"And as Moses lifted up the serpent in the wilderness, even so must the Son of Man be lifted up, that whoever believes in Him should not perish but have eternal life." (John 3:14-15) 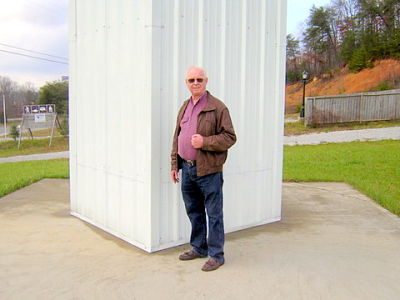 Mr Potter has built a number of these crosses at 110 feet, and more than 40 smaller crosses that are a little over 20 feet.

At any given time he can be found assisting in the construction of these large crosses all across the USA, and some in foreign countries, with many others in the planning stage. Mr Potter has sent scores of blueprints and pictures to interested churches, communities, and individuals.

These crosses are not terribly expensive and will fit within the budget of many churches and small communities, as well as individuals. The materials can be purchased locally, or Mr Potter can place you in contact with the suppliers he has found to have the most reasonable prices, and who have fabricated this cross many times. A local contractor, or knowledgeable volunteers, can do the work.

They are asthetically beautiful and can be constructed to blend in with the countryside.

It is Mr Potter's hope that some day these beautiful large crosses will be seen in all parts of the world.

Beautiful Large Cross by I 75 in TN